We Saxons are a traditional people. Therefore we have been celebrating Saxony Day on the first weekend of September for 25 years now, expressing our joy and pride in the region, associations, economy, culture and what we have created together.

Löbau had qualified as the venue for 2017. The small town with a population of 15,000 can look back on great experience as an organiser (e.g. Landesgartenschau 2012) and therefore went to the planning of the 3-day festivity with routine and optimism. It was already clear in advance that the parade and the colourful hustle and bustle on the 15 media and theme stages would be among the well-attended highlights. One counted on approximately a quarter of a million visitors, who would crowd themselves as constant stream by the historical roads and on the many small places.

Large crowds always have the potential for accidents, injuries, criminal machinations and – unfortunately – violence. Safety aspects have therefore played a major role from the outset. The Görlitz Police Headquarters relied on the proven mix of good advance planning, control and a visible official presence. The entire fixed area for vehicles had been closed, all access roads secured, checkpoints and a shuttle bus service set up. Police stations, temporary guards and double stripes of Saxon, Czech and Polish officers also provided visual security.

“Wellner’s engineers and technicians have shown themselves to be very flexible in the preparation phase and especially during the event itself. Technical start-up difficulties were quickly solved. Our colleagues were very satisfied with the cooperation.”
Stephan Haase, Einsatzgruppenleiter / Einsatzunterstützung / Polizeiverwaltungsamt Dresden

A WellnerBOX “mobile”, which was equipped with the latest camera technology and a new 8m telescopic mast especially for monitoring visitor flows, provided the right overview. Positioned at Nikolaiplatz, the security system gave the emergency services a perfect view of the surrounding streets in the city centre and of the well-frequented Nikolaikirche.

We use a powerful UMTS/LTE antenna or the direct LAN connection for the connection to the control centre as standard. However, with the expected 250,000 visitors and the resulting load on mobile networks, this was not a reliable option. High-resolution images in real time require a reasonable data rate / bandwidth, which was realized in Löbau by means of a microwave link. The direct view to the town hall tower enabled a trouble-free and bug-proof connection between transmitter and receiver and would also have enabled the connection of further WellnerBOXes.

As good preparation is important, we discussed the situation in advance with the head of the task force, Stephan Haase, and his staff and conducted live tests on our premises. In the following days the calibration of interfaces and protocols was improved and finally the WellnerBOX was transported to Löbau. It was not so easy to determine the perfect location for the large number of possible positions. Even on site there was still a lot to be adapted to the conditions, but finally the connection was established and our monitoring solution took up service. The “problems” that were uncovered give us the opportunity for the future to adapt our solution even more precisely to the needs of government authorities and security agencies.

Retrospectively it can be said that the Day of the Saxons 2017 took place without any major incidents from a police point of view (this link leads you to the police point of view). But to believe that this would only be a merit of the technology used is wrong. The close interaction between man and technology can nevertheless make the work of the security forces on site noticeably easier and provide new possibilities for the command and control of operations. We would like to continue to support the Saxon police in the future and realize new exciting projects and events. 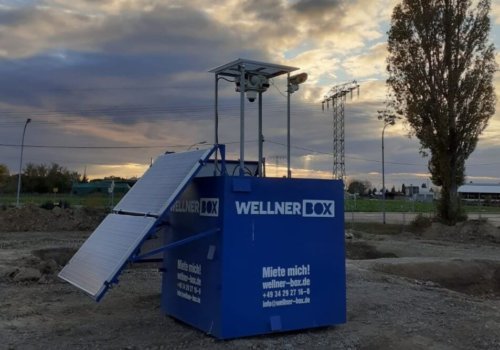